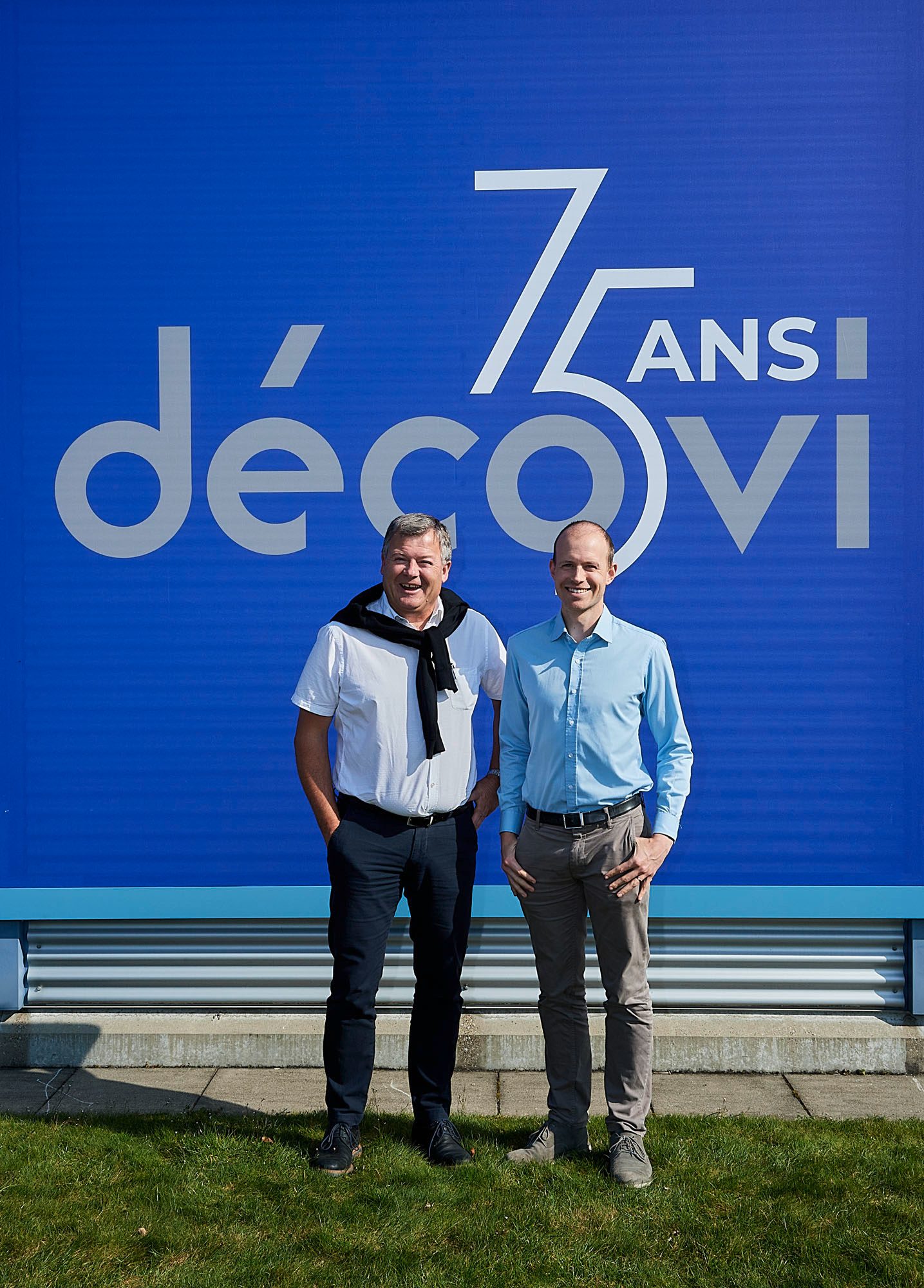 An important page in the history of Décovi, a member of the Acrotec Group, will turn by the end of the year with the departure of Claude Chèvre, its managing director for more than 30 years, who will hand over the reins of the company to Cédric Chèvre, his son. A natural transition that perpetuates the family tradition within one of the most important bar turning companies in Switzerland.

Vicques, December 1st, 2022. Décovi has just celebrated its 75th anniversary with dignity in the presence of the highest local and cantonal authorities. A long story born in Vicques in 1947 thanks to the entrepreneurial spirit of Denis Chèvre who launched his first workshop with three cam-operated bar turning machines.

A few decades later, in 1992, Denis Chèvre handed over the general management of Décovi to his son, Claude, who has been active in the family business since 1985.

Thirty years later, Claude Chèvre can admire the path traveled and serenely pass the torch to his son. « It’s the right time, » says Claude Chèvre. « Décovi is in excellent health and Cédric has proven himself remarkably well. We have just passed the milestone of 100 employees and, for the first time in our history, Decovi’s monthly turnover is above 3 million francs. »

This great growth is also to be credited to the future young retiree who has prepared the future well. « Décovi’s strong growth will continue in our fields of watchmaking and microtechnology, » explains Claude Chèvre. « Our order books can testify to this and the synergies within the Acrotec Group allow us today to offer the assembly of oscillating weights with bearings developed by KIF Parechoc. »

Claude Chèvre has also prepared the grounds to launch the project of the factory’s expansion to a new area of 2,000 m2, still in Vicques, which will start next year and end in December 2023. This is an important step for further development of Décovi’s machining and business skills (mechanical engineering, bar turning, programming, precision mechanics, quality control, etc.) which have so far enabled it to obtain ISO 9001, ISO 13485 (medical) and ISO 14001 (environment) certifications. It will also be a new setting for the exceptional fleet of more than one hundred CNC machines: bar turning, milling and 3 to 5–axes multifunctional lathes, decoration, laser engraving and 3D printing equipment, which can still be expanded.

Co-CEO since the start of 2022, Cédric Chèvre will therefore naturally take sole charge of Décovi on January 1. « This family succession has been anticipated since a long time, » explains Cédric Chèvre. « Our customers have been informed and I have an excellent relationship with them. I am also very well surrounded by an excellent team. It is with great motivation and pride that I take on this role in an environment that requires us to constantly adapt with agility. Our challenges for tomorrow are multiple, with new projects that promise very interesting growth prospects. Significant investments are planned to acquire more modern versions of certain machines, improve performance and develop new processes, by constantly implementing new technologies, particularly for automation. We will also continue and intensify our efforts in continuous learning and education in order to promote the talents of tomorrow while respecting our strong local roots. »

The entire Décovi team would like to thank Claude Chèvre for his 37 years of service to the company and wish him a happy and healthy retirement.

Son of Denis Chèvre, founder of Décovi in 1947, Claude joined his father at Décovi in 1985. Together, in 1987 they set up the limited company Décovi, whose work area is tripled. The company’s name is an abbreviation from French words décolletage (bar turning) and Vicques. In 1992, Claude Chèvre was appointed as general manager along with his brother Jean-Paul, following the retirement of his father. It is under his influence that Décovi experienced its strongest growth. In April 2000, he inaugurated his brand new factory having bought the first parcel of the new La Romaine Industrial Zone in Vicques. In 2008, Décovi made the first successful attempts at heavy metal machining without imagining that 10 years later, oscillating weights would represent the largest part of its turnover with approximately 1 million parts produced each year! It was in 2009 that Claude Chèvre decided to join the Acrotec group among its first member companies. A bold decision at a time when this kind of grouping was not commonplace. But a decision that paid off, respecting the independence of Décovi and guaranteeing the family succession that is being put in place today. In 2011 and 2014, he managed two successive extensions of the factory with 1,800 m2 dedicated to oscillating weights. Claude Chèvre therefore leaves to his son a very healthy, innovative company, rich with a team that recently passed the milestone of one hundred people, and which has just passed the milestone of 3 million in monthly turnover.

After obtaining his HES engineering degree in mechanics, Cédric Chèvre began his professional career in 2010 in the field of machine tool design at Tornos, then Willemin-Macodel. A period during which he ends his days with evening classes to obtain an MBA in management. In 2015, his father called him into the family business, Décovi, to take responsibility for the oscillating weights with the success that we know today. In 2017, Cédric quickly became production manager then deputy general manager in January 2021 and co-CEO in January 2022. Cédric is very attached to the synergies that exist and are developing within the Acrotec Group with the desire to preserve the values of Décovi which have made its success and its identity for three quarters of a century.

Acrotec is an independent group created by micromechanics professionals. Its main objective is to be a benchmark subcontractor by offering a wide range of precision component manufacturing processes. Its strategy is to provide “Swiss Made” quality products to the entire watch industry as well as to the automotive, electronics, medical, jewelery and aeronautical industries. Acrotec is distinguished by the extent of the know-how exercised under the same roof, in precision machining (CNC turning, CNC multi-spindle bar turning, cam bar turning, 3 & 5–axis milling, micro bar turning, transfer and machining of precious metals), by support processes (surface treatment, cutting, assembly, heat treatment, decoration, micro–welding and micro–laser cutting), by specific processes (production of components by UV-LIGA, wire erosion/sinking, stone machining synthetic materials, rolling, shaping of springs, production of machines and tools and etching on silicon – DRIE). Currently, Acrotec Group has 2,400 employees.